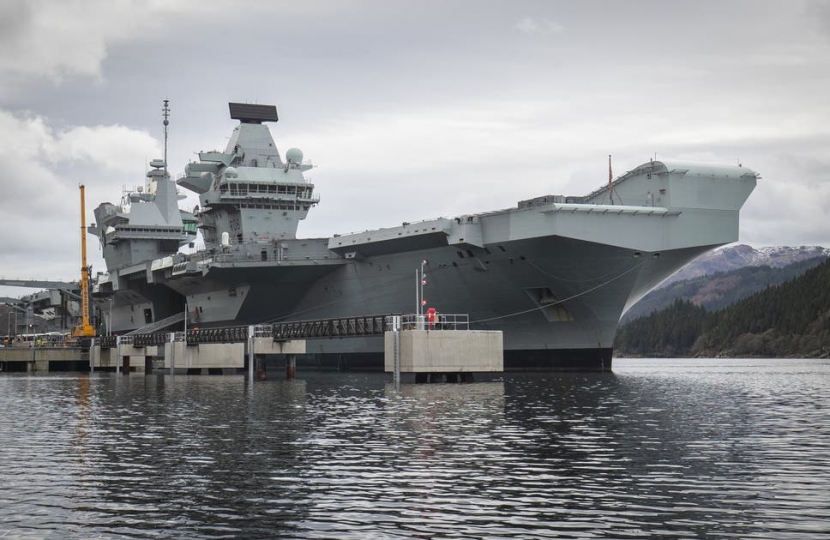 Today, the Secretary of State for Defence, Ben Wallace MP, announced that the UK's largest ever Carrier Strike Group would set sail later in the year. The UK Carrier Strike Group’s globe-spanning maiden deployment will feature visits to India, Japan, Republic of Korea and Singapore and will be led by the new aircraft carrier HMS Queen Elizabeth.

HMS Queen Elizabeth, the most powerful surface vessel in the Royal Navy’s history, will next month set sail as the flagship of a Carrier Strike Group. Joining her will be a surface fleet of Type 45 destroyers, HMS Defender and HMS Diamond, Type 23 anti-submarine frigates HMS Kent and HMS Richmond, and the Royal Fleet Auxiliary’s RFA Fort Victoria and RFA Tidespring. Below the surface, a Royal Navy Astute-class submarine will be deployed in support, armed with Tomahawk cruise missiles.

A US Navy destroyer, a frigate from the Netherlands and a squadron of US Marine Corps F-35B jets are also fully integrated.

In Parliament, the Defence Secretary explained how the Carrier Strike Group will help achieve the UK’s goal for deeper engagement in the Indo-Pacific region in support of shared prosperity and regional stability – a stated aim of the Government’s recently published Integrated Review into foreign, defence, security and development policy.

The forthcoming deployment will bolster already deep defence partnerships in the region, where the UK is committed to a more enduring regional defence and security presence. Ships from the Carrier Strike Group will participate in Exercise Bersama Lima to mark the 50th anniversary of the Five Powers Defence Agreement between Malaysia, Singapore, Australia, New Zealand and the United Kingdom.

Engagements in Singapore, the Republic of Korea, Japan and India will provide the opportunity for strengthening our security relationships, tightening political ties and supporting our UK exports and International Trade agenda.