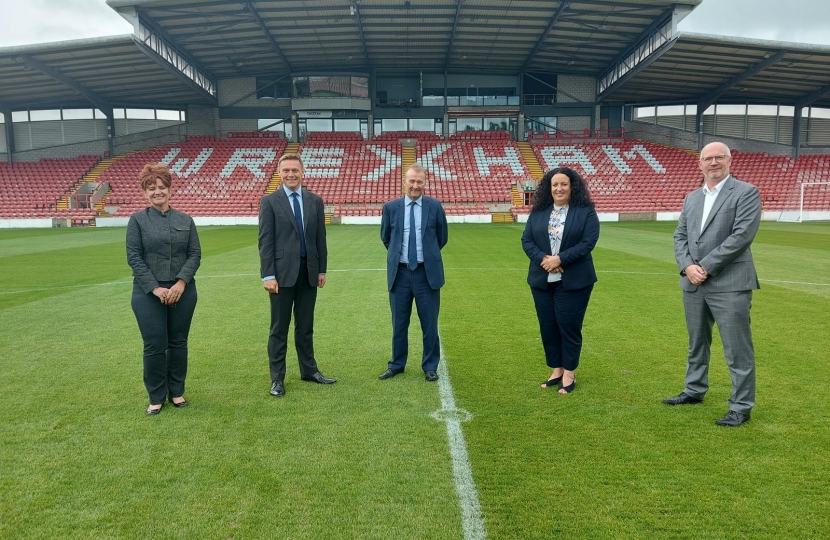 Today Wrexham welcomed three UK Government Ministers in a day of visits across the town with bringing attention to Wrexham businesses, HMP Berwyn, Wrexham AFC and the Job Centre.

We then joined the Minister for Prisons and Probation, Alex Chalk MP, at HMP Berwyn where we met the Governor, Nick Leader, and spoke to prisoners on the Veterans’ Wing. Here, we heard about some of the unique challenges veterans face in the prison and justice system and discussed the newly established ‘Employment Advisory Board’, of which I am a member. The HMP Berwyn ‘Employment Advisory Board’ is a Government scheme to link those leaving HMP Berwyn with employment opportunities in the Wrexham area.

Following this, we went to Wrexham AFC with Will Quince, the Minister for Welfare Delivery within the Department for Work and Pensions. At the football club, we received a tour of the stadium and discussed the club’s development plans, which include a redevelopment of the Kop Stand. We also met Oliver, a recent graduate who is currently employed at the Racecourse Community Foundation as part of the UK Government’s Kickstart Scheme, to hear about what he has achieved during his placement doing social media and communications for the Football Club. The Kickstart Scheme aims to support 16- to 24-year-olds on Universal Credit into employment who are at risk of long-term unemployment.

Overall, it was a pleasure to three Ministers in Wrexham and to showcase what our amazing town has to offer the country and the world. Indeed, the day of visits showed that Wrexham really is on the map, and I am pleased to have been able to facilitate this.

Throughout the day, it was excellent to be able to introduce UK Government Ministers to those that contribute to our community and identity, from Wrexham Lager to those at the football club. More importantly, it was also brilliant to be able to see UK Government successes in action, whether that be at HMP Berwyn where the Veterans Wing is providing Veteran-specific support or at the Job Centre, where it was clear that the Government’s wide ranging employment support measures as we exit the pandemic are doing helping people back into work.