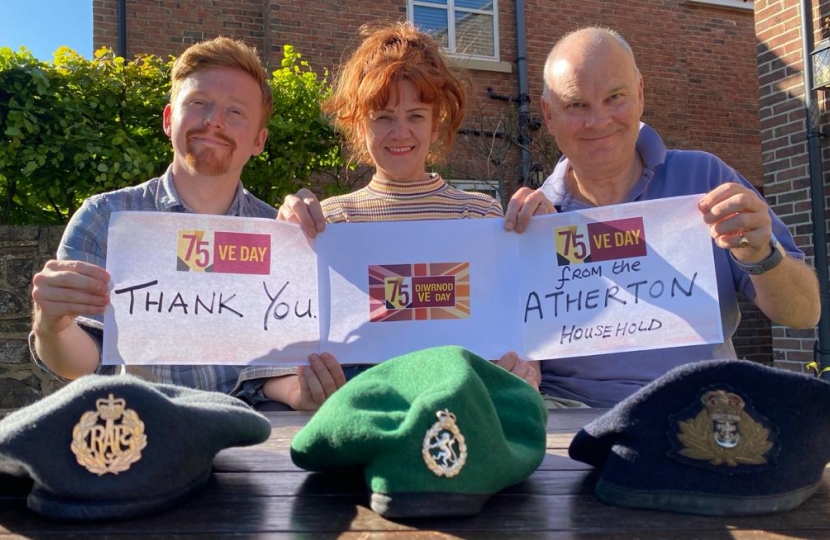 Today marks the 75th anniversary of Victory in Europe Day. On this day, 75 years ago, the Allied forces formally announced the surrender of Germany, which brought an end to the Second World War in Europe.

At 11am today, our nation will fall silent for two minutes in honour of all the brave men and women who gave their lives for our freedom, and reflect upon the events which occurred three quarters of a century ago.

Due to the current coronavirus pandemic, much of this year’s public celebrations have been cancelled. However, measures have been taken to ensure that individuals can commemorate VE day at home, whilst adhering to social distancing measures.

As a military family; my son served in the RAF; my husband the Royal Navy; and, myself the army, we know all too well the importance of commemorating such events and to remember the sacrifices made by those in the military.

The BBC will be broadcasting a dedicated programme to mark the 75th anniversary of VE day including; extracts from Wartime Leader, Winston Churchill’s, famous victory speech; His Royal Highness the Prince of Wales reading extracts of his grandfather, King George VI’s, diary from 8th May 1945; and, finally at 9pm Her Majesty the Queen will address the nation. This will give everyone across the country an opportunity to come together, albeit virtually, to pay tribute to the Second World War generation and show our gratitude to them for their service and sacrifice during the war.

It is vital that our future generations know about the sacrifice made by those who fought and died for our freedom, independence and democracy. There are a whole host of ways for our children to get involved and to learn about this important day.

Parliament has curated materials from its archives. Visit: www.parliament.uk/ww2 to explore key legislation, famous speeches and the story of how the House of Commons chamber was reconstructed after the bombings. In addition, there are some excellent home-schooling materials for children of all ages.

The Department of Culture, Media and Sports has put together a VE Day Webpage along with stories from WW2 Veterans; ideas to host your own 1940s style tea party at home; and, ‘Thank you’ posters to print and display in your windows.

As we face some of the most challenging times since the end of the Second World War, now more than ever it is important to come together and unite, as communities did 75 years ago.