The Times: Sexual abuse in the armed forces should not be prosecuted by the military 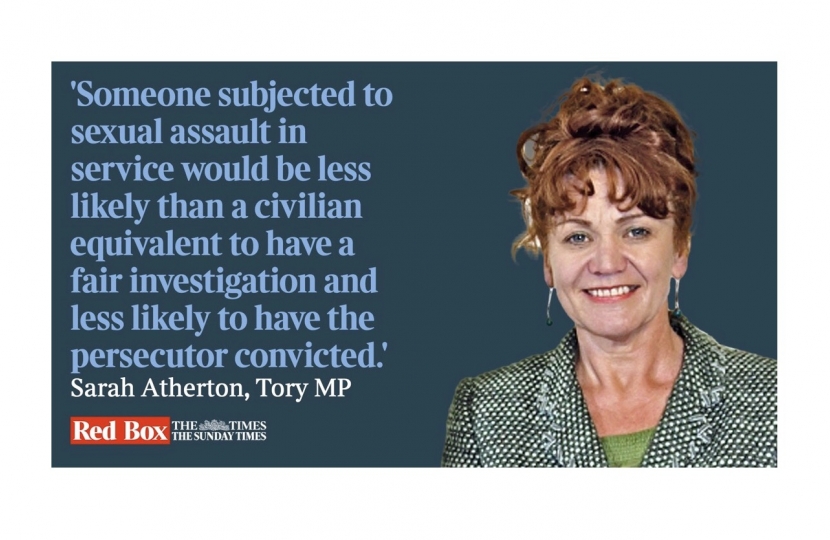 I am pleased that the issue of military rape trials being heard in civilian courts is being given the attention it deserves. After the suggestion this month that the defence secretary would “give fresh consideration” to the matter, I feel this is an important moment in the discussion of sexual abuse in the military. As the only ex-regular armed forces woman Member of Parliament and a member of the defence committee, I believe this is a discussion to be had, and soon.

The victim must be placed at the centre of the discussion. Determining how, and by whom, a sexual assault case is investigated and resolved is not simply a matter of statistics, nor should it be defined by the needs and restraints of the military system. The armed forces covenant, a subject close to my heart, is in place to ensure our incredible service personnel are not disadvantaged by the nature of their service. Over the past decade the MoD has made huge advancements in bettering the conditions for serving personnel, their families and those who have left the service.

However there are many narratives which show someone subjected to sexual assault in service would be less likely than their civilian equivalent to have a confidential and balanced investigation; less likely to have their persecutor convicted; less likely to receive appropriate support and more likely to develop longer term trauma as a result of their experiences. It is widely viewed that having civilian authorities investigating and deciding on service sexual assault cases would go some way to level this inequality.

While we must be mindful that the vast majority of service careers are undertaken without cause for redress and the military remains a rewarding career option, when a sexual assault does occur the long-term effects can be devastating. Research has shown that military victims of sexual assault are less likely to report a crime. When they do, they often take longer to report it, losing precious investigatory time. We must ask ourselves why this is the case.

I have heard stories of the discomfort suffered in raising something so very personal, that may then be discussed with your boss or colleagues. Such strong discomfort that some choose not to “make a scene” about something that “isn’t a big deal”. We must ensure that those who bring a case forward know that it will be treated fairly and received with appropriate levels of care, privacy and impartiality.

Many report a disparity between the inclusive and protective values of the MoD and the realities on the ground. We still hear details of allegations becoming common knowledge in close-knit military communities — when the victim lives and works in this environment, there’s no going home and “switching off”.

We have a responsibility to ensure that military justice is effective and fair and that service victims of sexual assault are not disadvantaged by the nature of their service. Conversations are beginning to be had around this crucial issue and the defence secretary’s commitment proves that. However, there is much more to be done and I look forward to using my position on the defence committee to further pursue the experiences of women in the military.