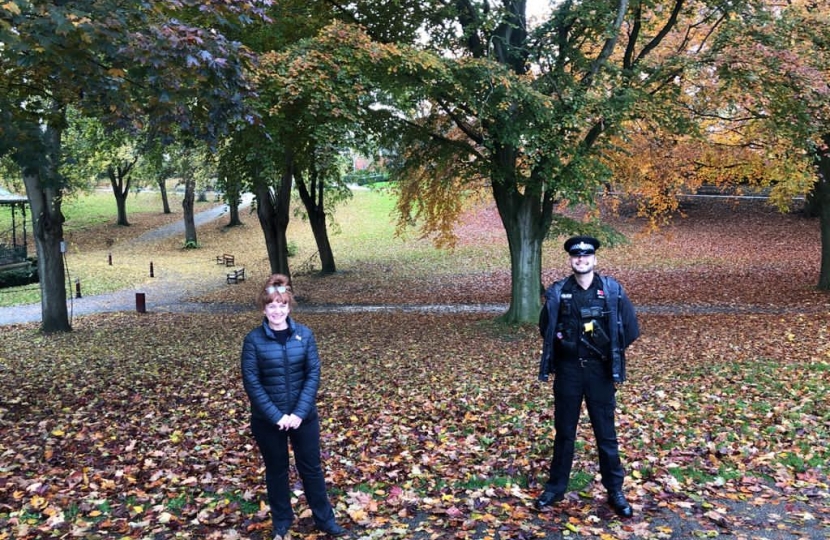 These initiatives follow residents’ concerns over drug dealing and anti-social behaviour, including a number of burglaries last year in the local area.

Commenting on the walkabout, Sarah said:

“Wrexham police have been hard at work throughout October as part of Operation Blue instinct and Offa October; two fantastic initiatives aimed at disrupting and deterring criminality in the local area. An increased police presence is vital to cracking down on anti-social behaviour and making our streets safer”

“It was a pleasure to join officers on a socially distanced foot patrol and to see first-hand the positive impact they have on our local community.”

“As an Offa resident I’m delighted to see a stronger police presence here. There is considerable Anti-social behaviour which seems to have gone unnoticed by the authorities for some time.”

New statistic show that nearly 6,000 extra police officers have been recruited in the first year of the UK Government’s major police recruitment drive, with 65 additional officers in North Wales, bringing the total  to 1,602. This places the Government on track to deliver 20,000 extra officers by 2023, and is ahead of schedule to have the first 6,000 in place by March 2021.

“I am delighted to hear that we’re on track to hit our target of an additional 20,000 police officers by 2023. These new officers will be crucial in our fight against crime, as well as helping to drive down anti-social behaviour in and around Wrexham.

“Just one year since we began recruiting, I am delighted that there are nearly 6,000 of the 20,000 additional officers on our streets cutting crime and making your communities safer.

“As we’ve seen from the frontline response to coronavirus, the work of each and every police officer helps to save lives and I would like to extend my gratitude to them, and to the new recruits, for joining the police being part of this heroic national effort.”