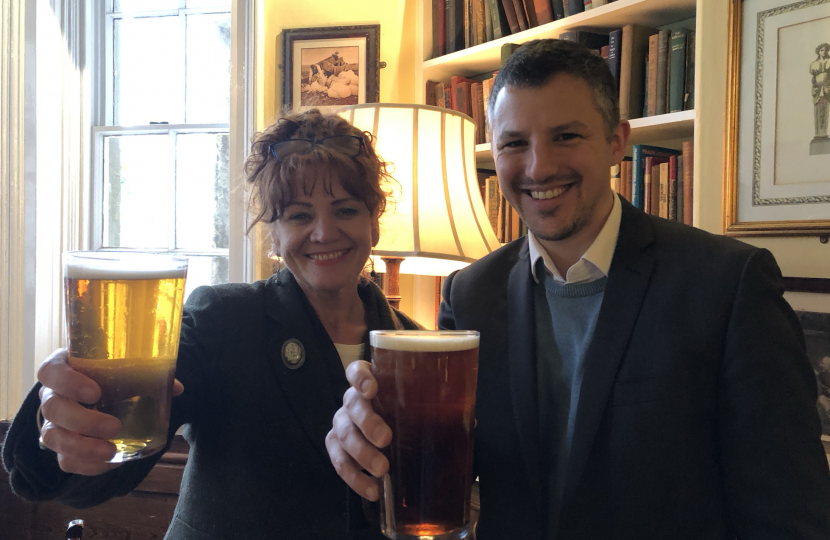 Wrexham MP has pledged her support for local pubs. The MP has backed the Long Live the Local Campaign to help pubs in Wrexham keep their doors open.

The MP has backed the Long Live the Local Campaign to help pubs in Wrexham keep their doors open.

She joins the more than 240,000 people who have signed the petition so far, including 285 in Wrexham alone and is now calling on the Government to cut beer tax at the Budget.

with £1 in every £3 pounds spent in UK pubs going to the taxman, British drinkers now pay 40 per cent of all beer tax across the EU, but drink only 12 per cent of the beer.

Seven in ten alcoholic drinks served in pubs are beer; underlining how directly a cut in the beer duty will help pubs.

Brewing and pubs in Wrexham support 1173 jobs and contributes £25.1 million to the local economy.

Commenting on the campaign, Sarah Atherton MP said: "Pubs are at the heart of communities across Wrexham, but with three British pubs closing their doors for good every day the Government should consider a cut to beer tax.

"I'm supporting the Long Live the Local campaign and calling on the Chancellor to cut beer tax at this year's Budget to support pubs in our local communities."

Emma McClarkin, chief executive of the British Beer and Pub Association, said: "Beer duty has increased by 60 per cent over the last 17 years and now the UK has one of the highest rates of tax in Europe. When over two thirds of all alcoholic drinks purchase in the pub are beers, a cut in beer tax would go a long way to protecting pubs across Wrexham.

"We are very grateful to Sarah Atherton for their support for the Long Live the Local Campaign."

I'm delighted to announce that I have been appointed as the Parliamentary Private Secretary to the Secretary of State for Wales, Simon Hart, and the Wales office.