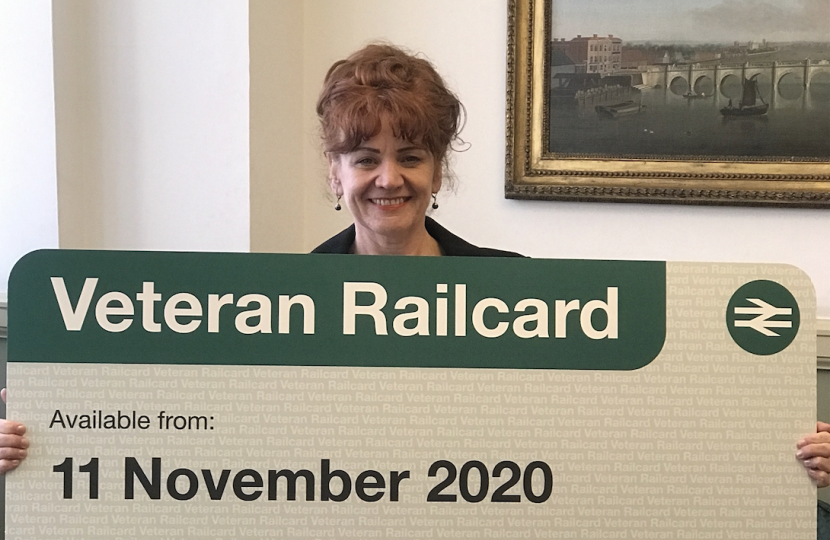 Wrexham's newly elected MP has welcomed the UK Government’s announcement that military veterans are to get cut price train travel with a new railcard in England.

Sarah Atherton, an ardent defender of Veterans’ rights, has called upon the Welsh Government to extend the scheme to Wales.

It is hoped the card, on sale from Armistice day, will help boost job prospects for former servicemen and women – and bring them closer to family and friends.

Underlining the UK Government’s commitment to supporting former military personnel, he said: “Every part of society should honour the debt we owe those who’ve served our country.

"I’m proud that the Department for Transport, together with other government colleagues and the rail industry, is doing its bit.

“This railcard will help open up opportunities to veterans, whether through employment and retraining, or by strengthening links with friends and family. I believe that enabling former service personnel to travel more easily is the least we can do."

Sarah Atherton, a former soldier, has been a constant and robust voice for veterans since being elected in December.

Ms Atherton has recently been elected onto the Defence Select Committee and has joined the All-Party Parliamentary Group for the Armed Forces.

She said: “Having served in the army myself, I know how this will improve the lives of military families, whilst boosting veterans’ job prospects through more affordable travel.

"I urge the Welsh Government to follow suit and extend this scheme to Veterans in Wales.

“During my time in Parliament, I am committed to supporting our brave service personnel and veteran for their valuable contributions.

“I have been in dialogue with Veterans Minister Johnny Mercer urging him to work with the Welsh Government to ensure that this fantastic policy is extended to Wales.

"He gave me his assurances that all is being done to help support our veterans and that the introduction of the railcard is only the beginning of the Governments Veteran strategy, ensuring the UK is the best place to be a veteran in the world.”

A Welsh Government spokesperson said: “We fully recognise the remarkable contribution made by our veterans and already provide free bus travel to severely injured service veterans and personnel.

"We are also looking at how we can roll out the discount railcard in Wales.”

I'm delighted to announce that I have been appointed as the Parliamentary Private Secretary to the Secretary of State for Wales, Simon Hart, and the Wales office.