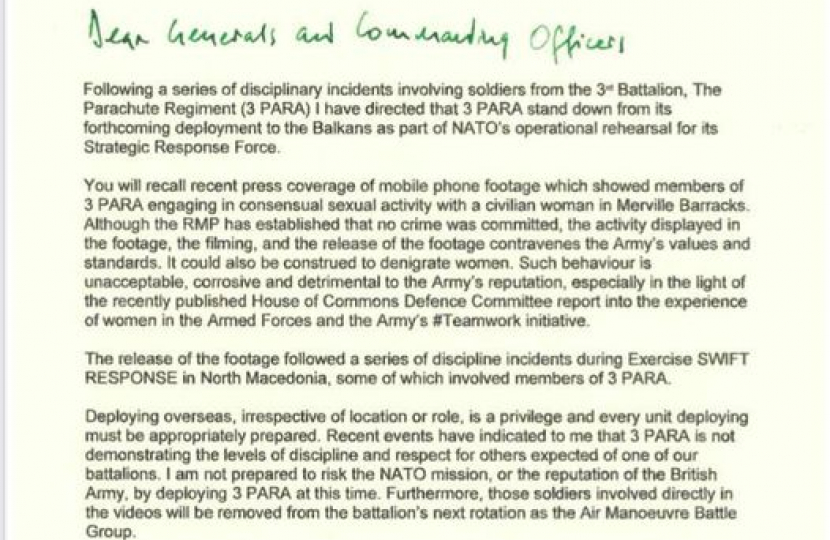 I very much welcome this strong action by General Sir Patrick Sanders. This shows leadership and strong direction by the Ministry of Defence.

My Defence Select Committee report highlighted sexual misconduct, degrading attitudes towards women and behaviour that should not be tolerated in a modern progressive army. This is sends a clear message to soldiers and their commanding officers to reflect upon and adjust their culture.

You can read the report and the Governments response in full here: https://committees.parliament.uk/.../women-in-the.../news/

See a full transcript of the letter below:

Following a series of disciplinary incidents involving soldiers from the 3rd Battalion, The Parachute Regiment (3 PARA) I have directed that the 3 PARA stand down from its forthcoming deployment to the Balkans as part of NATO’s operational rehearsal for its Strategic Response Force.

You will recall recent press coverage of mobile phone footage which showed members of 3 PARA engaging in consensual sexual activity with a civilian woman in Merville Barracks. Although the RMP has established that no crime was committed, the activity displayed in the footage, the filming, and the release of the footage contravenes the Army’s values and standards. It could also be construed to denigrate women. Such behaviour is unacceptable, corrosive, and detrimental to the Army’s reputation, especially in the light of the recently published House of Commons Defence Committee report on the experience of women in the Armed Forces and the Army’s #Teamwork initiative.

The release of the footage followed a series of discipline incidents during Exercise SWIFT RESPONSE in North Macedonia, some of which involved members of 3 PARA.

Deploying overseas, irrespective of location or role is a privilege and every unit deploying must be appropriately prepared. Recent events have indicated to me that 3 PARA is not demonstrating the levels of discipline and respect for others expected of one of our battalions. I am not prepared to risk the NATO mission, or the reputation of the British Army, by deploying 3 PARA at this time. Furthermore, those soldiers involved directly in the videos will be removed from the battalion’s next rotation as the Air Manoeuvre Battle Group.

These measures will allow a battalion with remarkable fighting spirit and a magnificent history to reflect on where it has fallen short of what we all expect of our Army. I know that 3 PARA will respond quickly and restore the reputation that they deserve.

My message to the Army is clear: our licence to operate is founded on trust and confidence and we must hold ourselves to the highest standards.

Since becoming an MP in 2019, Sarah has made a wide contribution to Parliamentary life through speeches, questions and other activities.