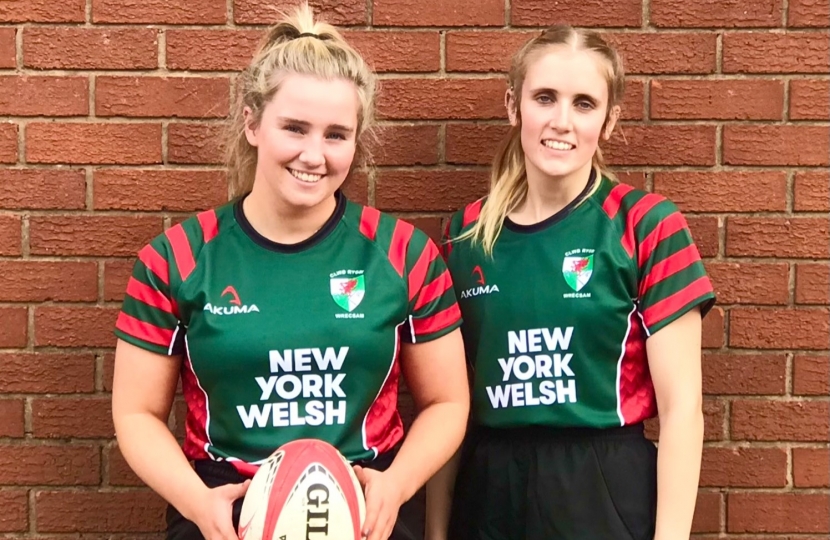 Recently, it was revealed that the Wrexham Rugby Club women’s team will be sponsored by New York Welsh – a diaspora group based in New York that endeavours to celebrate “welsh success stories in New York while inspiring the creation of new ones”.

The funding for this sponsorship has been provided by three New York Welsh members; Ty Francis and Marc Walby, both co-founders of the group, and the Welsh actor Matthew Rhys. Rhys has starred in recent hits such as The Americans, for which he won a Primetime Emmy Award, The Edge of Love and The Post.

Recently, Ty Francis from New York Welsh and I met through the All-Party Parliamentary Group (APPG) for ‘Wales in the World’. The APPG for Wales in the World aims to “generate awareness of the profile of Wales on the international stage, and in doing so to consider themes and ideas to support the development and profile of Wales.” Following this meeting, I facilitated a link between Wrexham Rugby Club and SponsorOurClub, also founded by Ty Francis MBE in 2018, helping to form the sponsorship arrangements.

I am incredibly pleased to have been able to facilitate this partnership. Ty and his team at New York Welsh do amazing work supporting grassroots sports, and I am so pleased that their philanthropic work has spread to Wrexham. I know that many across our community will be so grateful to Matthew, Ty and Marc for their generosity, and it is incredibly exciting that Wrexham is getting an even bigger sprinkle of Hollywood with Matthew’s involvement; now it looks like rugby, as well as football, will be getting the Hollywood treatment here in Wrexham!

SponsorOurClub connects Welsh diaspora and philanthropic individuals with regional female football and rugby teams accredited by the FAW and WRU, and mixed ability teams across Wales in need of financial support. The initiative has so far found funding for over 400 players in Wales.

“It's not just Wrexham Football Club with an American connection now, Wrexham Rugby Club is pleased to announce our new sponsorship from New York Welsh, for which we are so grateful.

“Funding for sport at a grassroots level is always difficult to come by, but the generosity of Matthew, Ty and Marc really is very much appreciated and will help our amazing women go from strength to strength. Our thanks also go to the MP for Wrexham, Sarah, for making the connection between us and Ty Francis, from SponsorOurClub and New York Welsh!”

“I am really proud to have the opportunity to support Clwb Rygbi Wrecsam with Matthew and Marc – it’s still staggering how underrepresented the women’s game is! We really hope that this will be the first of many women and girls’ clubs in the region that we can help through our New York Welsh network and SponsorOurClub initiative.”

“At New York Welsh we are incredibly excited to support such a wonderful group of talented players. Our members are passionate about supporting our local communities back home and are proud to be able to play a small part in growing the national women’s game. We will be closely following their progress from across the pond.”

A comprehensive trade agreement with New Zealand will cut red tape for businesses, end tariffs on UK exports and create new opportunities for tech and services companies, while making it easier for UK professionals to live and work in New Zealand.