The Telegraph: Ten Years in Jail for protesters who desecreate war memorials 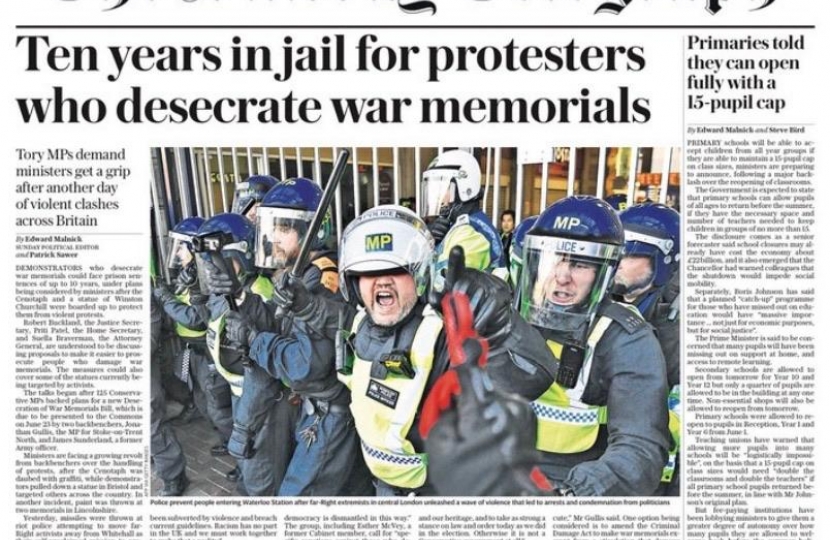 Open Letter  in the Telegraph - Desecration of War Memorials

While we condemn racism in all its forms, we must not rip down public monuments, shatter the fabric of our society, attack our institutions, tolerate criminality or make people feel anything other than pride when it comes to British culture and heritage.

The recent protests have been dominated by criminals who are undermining the very real fight against racism by burning flags, vandalising sacred war memorials and attacking police officers. This has caused outrage in our newly won constituencies in the Midlands, the North and Wales.

It’s time for these subversive individuals to be arrested, prosecuted and punished in accordance with the law.

The Government must send a clear signal that the Conservative Party is the proud party of law and order, will protect our culture and heritage, and that it will not stand idly by as our democracy is dismantled in this way.

Blue Collar Conservatives have put forward a Desecration of War Memorials Bill, seeking to bring specific sanctions about those who deface and damage war memorials and monuments, as happened with the statue of Sir Winston Churchill.

We hope that we will have the Government’s support.

North Wales MPs have described their ongoing battle to protect Airbus jobs. It was announced that more than 1,400 jobs are at risk at the aircraft manufacturer's Broughton plant.