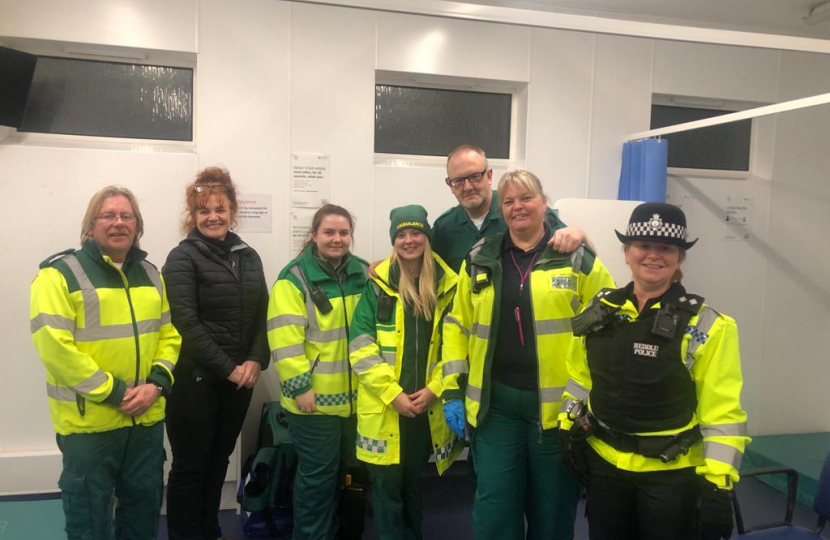 Recently, I joined Inspector Claire McGrady from Wrexham Town Police and Alison Watkin from Wrexham Council for an evening to learn, first-hand, about the campaign to make Wrexham’s streets safer.

The local Police team, led by Inspector McGrady, are working in partnership with Wrexham Council, following the awarding of over £500,000 to North Wales Police from the UK Government’s ‘Safer Streets’ and ‘Safety of Women at Night’ (SWAN) funds. Both the Safer Streets and SWAN funding were introduced by the UK Government to improve the safety of public places for all, with a particular focus on reducing violence and crimes against women and girls.

In Wrexham, the Police and the Council are using the funding to increase patrols across the town, to install new CCTV and street lighting, to provide for the opening of the Hafan Y Dref Welfare Centre on Friday and Saturday nights and to introduce marshals at the weekend. The Police hope that through these initiatives that concerns about safety can be addressed, making Wrexham a more enjoyable place to socialise and enjoy. It is also hoped that the provision of such services will relieve pressure on A&E and the Ambulance Service.

During the evening, I met with Inspector McGrady and Alison Watkin to discuss the strategies, challenges faced and their successes so far. I also met with the team running the Hafan y Dref welfare centre, where I heard about the positive impact they are having.

Given that tackling crime and antisocial behaviour is one of my key priorities as the MP for Wrexham it was a pleasure to be able to see this project in action. The night-time economy is important in Wrexham, but I know that there have been issues with antisocial behaviour at night. At the recent roundtable meeting I held with the Police and the Council, antisocial behaviour at night was one of the issues raised and the Police and Council assured me that they would be working in partnership to tackle some of the concerns raised. As such, it was excellent to see this in action! Finally, this project has been possible thanks to substantial UK Government funding and I look forward to hearing about the project's further successes in due course.