'In the raging storm, only Penny can take the helm' 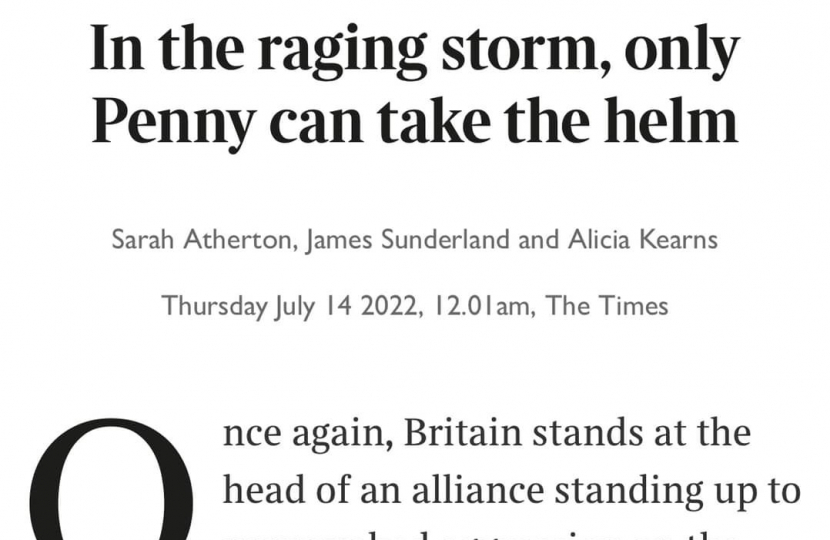 James Sunderland MP, Alicia Kearns MP and I have written an article for The Times explaining why we support Penny Mordaunt Leadership bid.

Read the full article below:

In the raging storm, only Penny can take the helm

'Once again, Britain stands at the head of an alliance standing up to unprovoked aggression on the European continent. Defence and security have always been paramount; but now they have once again re-entered public discourse, and many people will rightly be asking what our next prime minister’s approach will be. With the strengthening of the Nato alliance on one hand, and the rise of China as a strategic rival on the other, we need a leader who can strengthen our national resilience, while honouring Britain’s obligations abroad.

In the raging storm, only one woman can take the helm, navigate these domestic and global security challenges, and grasp the opportunities of the moment.

Penny Mordaunt is that leader for this moment. Service to our nation is in her blood, and this deep sense of duty serves to unite country and party. Her plan for the UK will tackle the most pressing issues of the day, without losing sight of the guiding principle of modern conservatism — the long-term prosperity and security of our great nation.

Calm under fire, Penny brings together the best of individual and collective leadership. Teamwork is essential to modern security. Hybrid warfare and hostile state threats extend far beyond the traditional limits of defence and foreign policy, and only a cross-government approach to defence can strengthen our institutions and develop a culture of resilience in our policy-makers.

Having worked in several policy areas, Penny has the ministerial experience to work with civil servants, break down the silos that government departments often find themselves in, and get the UK thinking about our security in a more joined-up and strategic way.

Above all, Penny has proven she has the will to act: to make the final decision and get on with the job. Having served as the UK’s first female defence secretary, she knows that security means constant vigilance. And she knows when to act decisively. Over the past few years, there have been times when the UK has been struck by paralysis. The resolve that Penny will bring to the highest office will drive us forward, not only in defence but across government.

As the only female member of Parliament who is a Royal Navy reservist, Penny has practical experience of modern defence, which guided her as minister for the armed forces, where she was a proven fierce champion for the armed forces. There is no greater endorsement of Penny than her appointment as defence secretary, on the recommendation of the chiefs of staff; glowing testimonies from senior officers and junior ranks alike show that she truly understands Britain’s armed forces at every level.

This hands-on experience and expertise qualify Penny to take forward reforms that are desperately needed. She knows that spending on our armed forces has to go up, but that this has to be accompanied by completing the organisational restructuring of the Ministry of Defence.

As prime minister, Penny Mordaunt will not waver in the face of aggression. She will be resolute in assisting our allies. We know she will take up the baton from Boris Johnson in supporting Ukraine and boosting the delivery of cutting-edge British military equipment that has been so instrumental in checking the Russian advance. Strategically she will focus on breaking Russia’s stranglehold in the Black Sea to avoid the global food crisis that Putin is so desperately trying to orchestrate.

In her role as minister for international trade, Penny is acutely aware of the wider strategic rivalries that are likely to shape the geopolitical struggles of this century. She understands the complexities of Britain’s relationship with China — that we cannot isolate ourselves from this growing power, but that we must be stalwart in defending our liberty and our values on the world stage. Britain must also seek to strengthen our relationships with like-minded allies and develop new partnerships across the Indo-Pacific. She led live trade negotiations and Britain’s application to the Comprehensive and Progressive Agreement for Trans-Pacific Partnership: we have a seasoned diplomat in Penny Mordaunt.

Penny understands the personal and national importance of defence and security. As someone who fiercely cherishes British values — freedom, fairness, courage, compassion and personal responsibility — she will ensure that they are never threatened. She has the courage and authority to speak frankly to the public about the defence of the realm.

In times of uncertainty, we need a leader with a steady hand on the tiller. We need someone who understands the complex nature of modern security; a natural alliance-builder with a vision for entrenching domestic resilience. For the good of the country, we wholeheartedly believe that the next prime minister must be Penny Mordaunt.'