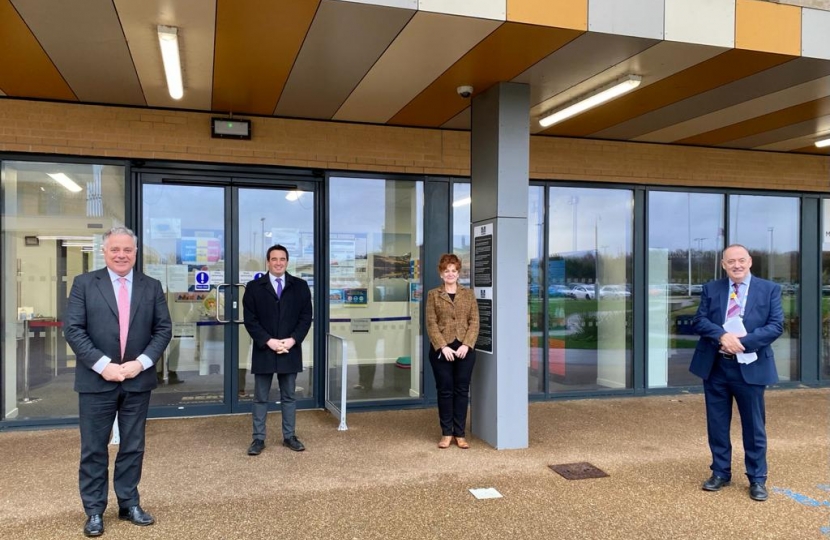 The Vice-Chair of the All-Party Parliamentary Group (APPG) for Veterans and MP for Wrexham, Sarah Atherton, invited other North Wales MPs to HMP Berwyn’s Veterans’ wing.

There are currently 25 ex-Armed Forces prisoners at HMP Berwyn on the industrial estate.

Dr James Davies, MP for Vale of Clwyd, Simon Baynes, MP for Clwyd South and Sarah Atherton were greeted on Friday by the Governor of HMP Berwyn, Nick Leader, before being toured around the Veterans’ Community, which aims to instil good discipline for first time offenders by ‘buddying’ new prisoners at Berwyn with a prisoner from the Veterans’ wing.

The MPs met Adrian Leslie from the Royal British Legion who supports the Veterans and Kieran Baxter, a Berwyn staff member who runs the wing as the Veterans in Custody Support Officer. As veterans themselves, Adrian and Kieron explained that prisoners were able to relate to them as they have shared some of the same military experiences, which contributes to good behaviour.

The MPs were introduced to some of the Veterans who told their stories, and explained some of the specific challenges they face as veterans in custody.

“Having served in the Armed Forces I am acutely aware of the unique burden and strains that are placed upon our armed service personnel and how difficult the transition to civilian life can be. Unfortunately I have witnessed Armed Forces personnel with PTSD or similar conditions who, upon leaving the military, find themselves with little support as veterans and then fall into the hands of the criminal justice system.

“It was a pleasure to be able to bring my North Wales colleagues here today to hear from prisoners about the challenges they’ve faced and the provisions Berwyn have put in place to support them on this Veterans Wing”.

“I am very grateful to the Governor, Nick Leader, for allowing us to tour HMP Berwyn and for telling us about the valuable work being done alongside the Royal British Legion to support the veterans in custody and their unique set of circumstances.

“I am proud of the courage and dedication of our Armed Forces and, for those who need extra support, it is our duty to ensure that those who served our country continue to receive the very best possible care.”

“I last visited HMP Berwyn immediately before it opened and I was grateful to be invited to return and to see good practice management of offenders in the Veterans’ Wing. I was also pleased to discuss mental health provision with the Governor and other staff.”

Thank you to all those who have been working overnight to respond to the flooding across Wrexham, in particular our emergency services and WCBC.

Dŵr Cymru have produced the helpful infographic below to explain what you should do in the event of flooding.