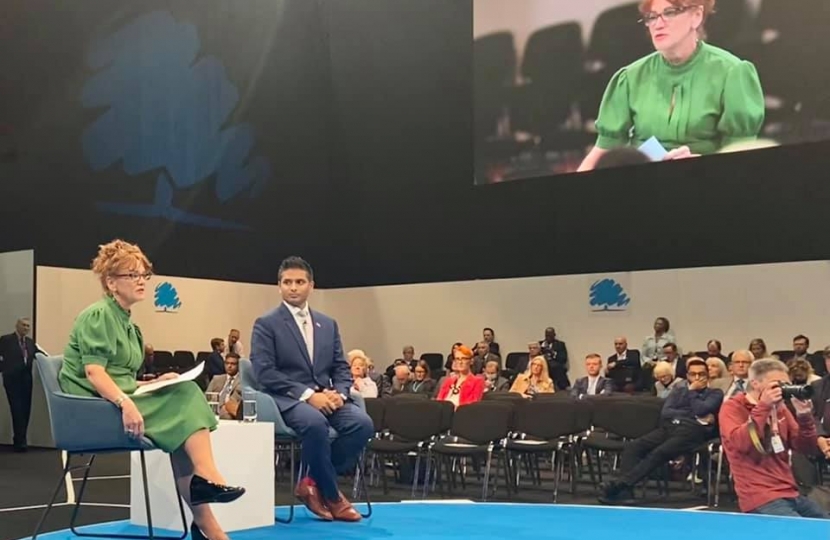 This week, I attended the Conservative Party Conference in Manchester. I was particularly pleased to have been asked to contribute to two panel discussions on the main stage of the conference. The first event was a discussion of veteran’s affairs in the United Kingdom and how we can further support veterans across the UK. As many will know, supporting the Armed Forces community is close to my heart, so it was an honour to share the stage with Leo Docherty MP, Minister for Defence People and Veterans Affairs and others. During the event, I discussed the importance of making sure the Welsh Government follows the other three nations of the UK in appointing a Veterans Commissioner for Wales, my ground-breaking report into the experiences of women in the Armed Forces and what can be done to make this country an even better place to be a veteran.

On the second panel, I was joined by the Chief Secretary to the Treasury, Simon Clarke MP, Baroness Goldie, the Minister of State for Defence and Sandesh Gulhane MSP for Glasgow as part of a discussion on the UK’s response to Covid-19, and how important the Union has been in the response. In my comments at the event, I welcomed the UK Government’s excellent vaccine rollout, driven with the help of the amazing efforts of the team at Wockhardt in Wrexham, and I discussed my own experience of returning to frontline nursing at the Wrexham Maelor during the pandemic. The event was an excellent showcase of what makes the United Kingdom so special, and it truly highlighted why we are all better off together.

During the Conference, the Centre for Policy Studies also released their brilliant report, “Strength in Union: The Case for the United Kingdom”, to which I contributed an essay on the military and our United Kingdom. My essay focussed on how the defence sector and our military bridge the four nations of the United Kingdom – England, Wales, Scotland and Northern Ireland – by creating economic links through defence contracts and employment, by supporting communities across the UK through such as through the vaccine rollout, or by providing effective security to everyone in the nation. Our Armed Forces and defence sector more widely are therefore an enduring symbol of our Union, of its strength and importance.

Watch the highlights from both events here.