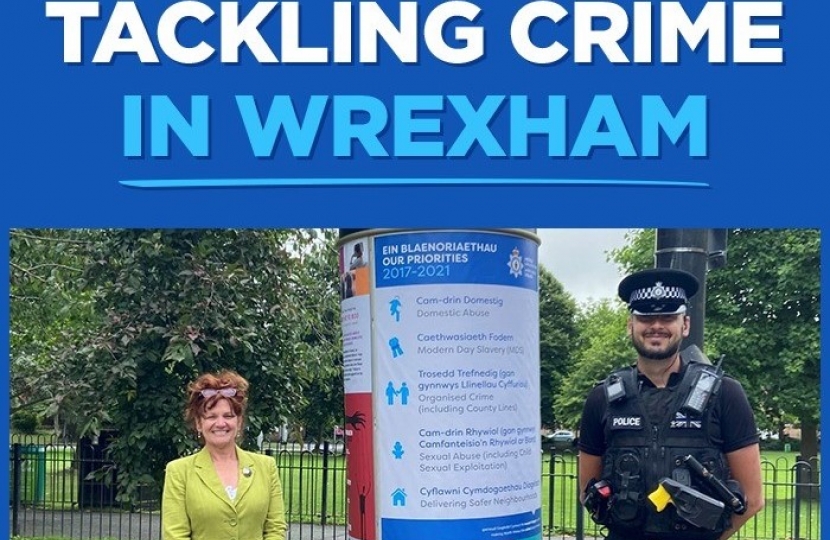 Last week, I hosted a roundtable discussion with the Leader of the Council, Mark Pritchard, and Wrexham town Police Inspector Luke Hughes to discuss antisocial behaviour and crime across Wrexham, with a specific focus on the town centre. Cllr Hugh Jones, the Lead Member for People – Communities, Partnerships Public Protection and Community Safety, at Wrexham Council and Alison Watkin, Community Safety Officer at Wrexham Council, were also in attendance. Wrexham’s Senedd Member, Lesley Griffiths MS, was also invited to attend but declined, stating that she did not feel crime and antisocial behaviour to be an issue in Wrexham.

This meeting followed my earlier invitation, in which I described how I have received an increasing level of correspondence regarding crime and antisocial behaviour in the town centre as Wrexham reopened from Covid-19 related restrictions. As such, I felt it was an opportune moment to bring community leaders together to address residents’ concerns.

During the meeting, ongoing concerns about antisocial behaviour and crime across Wrexham were discussed. I noted my own particular concern, following increasing correspondence on the matter, and specific issues such as public urination at Central Arcade in the town centre.

In addition, Inspector Luke Hughes from the Wrexham Town Police team reiterated the positive trends in crime across Wrexham. Alongside this, the recent UK Government allocation of £339,000 to North Wales Police from the ‘Safer Streets Fund’ was also discussed, the focus of which will be on promoting safer streets for women and girls, especially at night-time.

However, it was also recognised that many of the issues discussed often go unreported, which is why, following the meeting, those in attendance reiterated the importance of reporting instances of antisocial behaviour and crime are reported to the Police. Reports can be made by calling 999, or the non-emergency 101 number, or online at https://www.northwales.police.uk/.